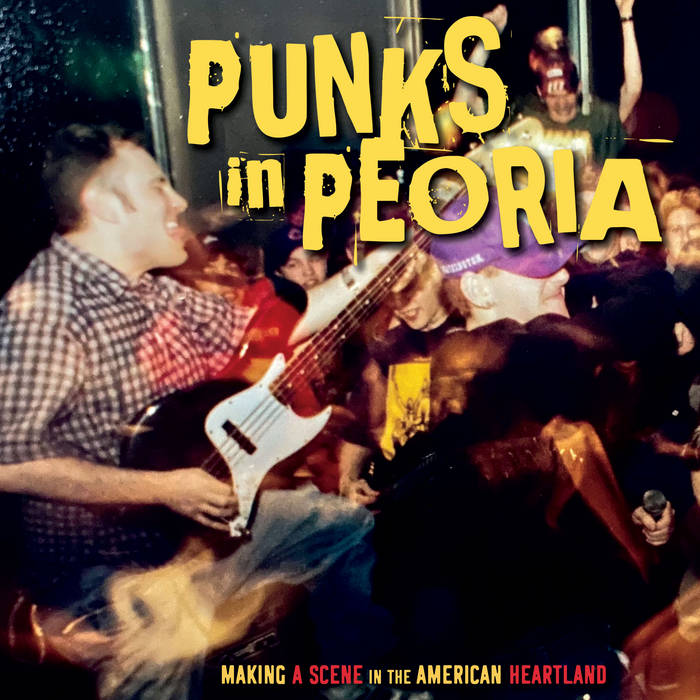 jaredwayne I had the old Dismiss tape in mp3 form at one point and then lost it on an old computer. It's cool to get this track back via 'Punks in Peoria.' Favorite track: I Want My Letters Back.

14-song document of the DIY punk/alternative scene in Peoria, Illinois, from its hardcore roots in the early 1980s through the late '90s. The album highlights out-of-print punk rock anthems, unreleased demos and rare studio tracks alongside extensive liner notes, photos and a scene poster.

This compilation is the companion soundtrack to the book Punks In Peoria: Making A Scene In The American Heartland by Jonathan Wright and Dawson Barrett, published by University of Illinois Press.

Punks In Peoria documents the evolution of the DIY punk scene in Peoria, Illinois—from its primal beginnings in the early 1980s to the dawn of the digital era. A lovingly curated collection of long-lost gems and hometown favorites from “Anytown U.S.A.,” it connects the varied work of disaffected youth across nearly two decades and multiple “generations” of Peoria punks, performers and scenesters.

From Midwest hardcore legends Constant Vomit and Caustic Defiance to the inimitable shock rocker Bloody Mess, the Peoria punk scene was built on the DIY spirit from the very beginning. As it grew beyond the rudiments of hardcore, the Peoria scene mirrored the larger slicing and dicing of post-punk into ever-narrower sub-genres—embracing goth, synth, pop, psychedelia, metal, and more.

Amidst the post-Nirvana haze of the early ‘90s, the gritty melodies of Dollface paved the way for a new generation of Peoria youth—some of whom would go on to tour the world in bands like Minsk and Planes Mistaken for Stars. This record is a document of that musical journey.


About the Book:
Synonymous with American mediocrity, Peoria was fertile ground for the boredom- and anger-fueled fury of punk rock. Jonathan Wright and Dawson Barrett explore the do-it-yourself scene built by Peoria punks, performers, and scenesters in the 1980s and 1990s. … What emerges is a sympathetic portrait of a youth culture in search of entertainment but just as hungry for community—the shared sense of otherness that, even for one night only, could unite outsiders and discontents under the banner of music. A raucous look at a small-city underground, Punks in Peoria takes readers off the beaten track to reveal the punk rock life as lived in Anytown, U.S.A.

"One of the strongest legacies of the hardcore punk movement in America was its emphasis on the local and the seeding of the country with self-supporting scenes. Every town has a story to tell itself about itself and Punks in Peoria explores this in magnificent detail for the hardcore scene in Peoria, Illinois. While more storied scenes from bigger cities may get the most ink, this book shows how the ideals and power of the music penetrated every corner of the land, but was only ever sustained by the grit and ingenuity of the people involved on the ground level. We need a book like this for everywhere."
--Guy Picciotto of Fugazi

"Punks in Peoria isn’t just a deep, heartfelt dive into the punk subculture of America’s quintessential small city. It’s an exquisite map of how music flows through social structures and between generations. Essential reading for anyone interested in how art impacts life.”
--Jason Heller, author of Strange Stars: David Bowie, Pop Music, and the Decade Sci-fi Exploded

"Punks in Peoria is free of jargon, centers the stories of the people who actually helped build the scene, and speaks to the experiences of the small cities and towns that have been the lifeblood of punk rock in the United States. It is a model for good research on punk."
--Zack Furness, author/editor of Punkademics: The Basement Show in the Ivory Tower


About the Authors:
Jonathan Wright is a writer, editor, musician, and longtime veteran of the Peoria music scene. He is editor in chief at Peoria Magazines. Dawson Barrett is an associate professor of history at Del Mar College. His books include The Defiant: Protest Movements in Post-Liberal America.